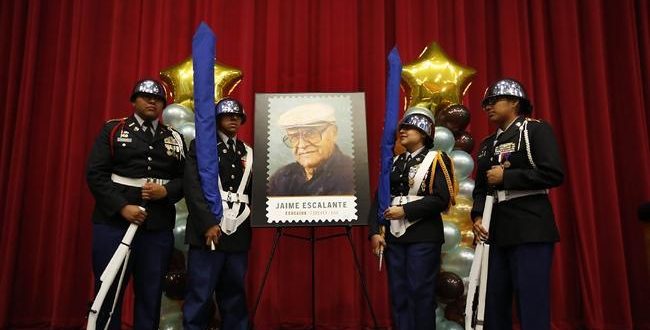 About a hundred friends, former students and fans of legendary East Los Angeles educator Jaime Escalante gathered at Garfield High School Saturday to honor the Bolivian immigrant whose success with his calculus students inspired newspaper articles, books and the film “Stand and Deliver.”

As the curtain fell to reveal Escalante’s demanding, kindly scowl, his former students raised their phones to snap photos and wiped tears from their eyes, pursing their lips in smiles tight with pride. Escalante died from cancer in 2010 at the age of 79.

“I can never talk about about Mr. Jaime Escalante without tears,” said Elsa Bolado, a former student of Escalante’s in 1982.

Escalante, Bolado said, did not have magical teaching methods or tricks. He just made his students work harder than they ever had before, Bolado said.

His legacy was “cultivating the American Dream” in an overlooked, impoverished neighborhood when no one else would, said Bolado. She tries to carry on his legacy in her job as an elementary school principal. His portrait hangs in her office at Graham Elementary School in South Central Los Angeles.Escalante gained national prominence in the aftermath of a 1982 scandal surrounding 14 of his students who passed the Advanced Placement calculus exam only to be accused later of cheating.

The story of their eventual triumph — and of Escalante’s battle to raise standards at a struggling campus of working-class, largely Mexican-American students — became the subject of the movie “Stand and Deliver” and turned Escalante into one of the most famous teachers in America.

J. Carlo Marquez, Garfield’s current assistant principal, spoke of the school’s continuing academic success as a lasting part of Escalante’s legacy. About 90% of the school’s senior class graduated this year, and about half of them have been admitted to state and private schools. Garfield’s Academic Decathlon team recently placed 7th in the state and 14th in the nation, Marquez added.

A multi-story mural of the educator towers over the school’s central courtyard. Calculus teachers who come to the school know they have big shoes to fill, Marquez said. Although the school is located in a neighborhood where the less than four percent of the population has a four-year college degree, there are 75 students in the Advanced Placement Calculus program — drawn to the school by Escalante’s name, Marquez said.

Four of Escalante’s former students gathered around his portrait after the presentation and spoke of the lessons he had taught them. “Take problems step by step” was a common one. “Break down the problem,” was another, said Jema Estrella, whom Esclante always teased for being an athlete. The most important advice Escalante gave them, each said, was “you can do it.”“He gave us confidence. And now when we run into problems, we don’t shy away from them,” said Rosa Gutierrez, Escalante’s student in 1989.

Escalante taught at Garfield from 1974 to 1991. But he continued to loom large over his students’ lives even after they left his classroom.During a conversation about Estrella’s future her senior year, she recalls, Escalante veered off on a tangent and showed her a photo of the Parthenon. “He said, ‘This is the most beautiful building in the world. You should go see this building someday,’” Estrella said. Now she is an architect.One of Escalante’s original students, Leticia Rodriguez, went to Princeton after graduating in 1982, then dropped out. She re-enrolled at Cal State L.A., then dropped out again. She had prepared to live out her life as a housewife when she ran into Escalante at a scholarship dinner in 1989. When he heard she had dropped out of school, Escalante had just one question, Rodriguez said. “You’re going back, right?’ Rodriguez, knowing how little patience her former teacher had for excuses, told him yes. The next year, she re-enrolled in Cal State L.A. and went on to get her masters at Cal Poly Pomona. These days, she’s an electrical engineer at Honeywell.“He wanted us all to be engineers,” Rodriguez said.