Mail the kids to grandma? A few frugal parents did, since the weight limit on parcel post was 50 pounds.

As a bid to stay relevant in the digital age, the U.S. Postal Service has been experimenting in select cities with delivering groceries. It makes a certain amount of sense, given that letter volume has dropped and the USPS’s civilian labor force is second only to Wal-Mart ’s. But a century ago, the post office did even better, delivering not only groceries but also children. I’m serious.

In the 19th century the U.S. was still largely a rural nation. Farmers had to venture to their local post office, almost always at their country store, to pick up their mail. Beginning in 1896, however, Congress enacted Rural Free Delivery, meaning that mail and small packages would be dropped directly at each residence. Then came parcel post in 1913, providing that large packages—the limit eventually rose from 11 pounds to 50 pounds—could be delivered to city and farm.

Congress had been reluctant to provide any package service for rural customers, because mail was fully subsidized by taxpayers, no matter the losses. Further, there were already four major private firms delivering packages, including the still well-publicized (at least in old movies and songs) Wells Fargo Express. But catalog companies, in particular Montgomery Ward and Sears Roebuck, saw an enormous market among isolated farmers. They pressured Congress to institute parcel post, no matter that the prices charged for big packages wouldn’t be anywhere near commensurate with actual costs. 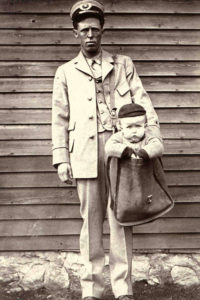 Once the deliveries began, about the only restrictions were no poisons, inflammable materials, pistols, live or dead animals, intoxicants or any articles “with a bad odor.” Everything else was mailed: groceries of all sorts, even fragile items such as eggs. And until June 13, 1920, when the action was formally proscribed, the most fragile of all parcels, children, were mailed, with appropriate postage stamps on their outer clothing.

Most times the journey was short, as in the instance of an infant delivered to an address about a mile or so from home. But for longer distances, it was much cheaper to use parcel post (just a few cents) than to buy a seat on a passenger train. Besides, children sent via post rode a train anyhow, situated in the mail car where they were tended to, even fed, by clerks.

There was a good measure of publicity stunt by the post office in these endeavors; there are extant photos of mail carriers with a babe in a delivery bag. Though this is hard to believe today, customers then knew their mail carriers and trusted them with such precious cargo.

Some notable deliveries, as recorded in the Smithsonian’s National Postal Museum: In February 1914 May Pierstorff, just shy of her sixth birthday, was mailed from Grangeville, Idaho, to Lewistown, Idaho, to visit her grandparents. At 48½ pounds, she barely beat the 50 pound limit. Total distance: 73 miles. Total postage: 53 cents. The next March, Edna Neff, also 6 years old, set the record for the longest mailing: from Pensacola, Fla., to Christiansburg, Va., a distance of 727 miles. Her postage was only 15 cents.

The outright absurdity of the practice resulted in a profusion of criticism of the postal service from the newspapers. For example, the Washington Herald, on the front page of its edition for June 12, 1920, provided a ridiculing farewell to the practice:

“If the wife goes to the country the kids may land on dad’s desk some bright morning, cancelled stamps on forehead and perhaps a bit banged up around the corners.

“Washington’s postmaster, Merritt O. Chance, has been asked twice during the past week to send babies by parcel post. With his assistants he has been busy ever since trying to uncover regulations on ‘live shipments.’ . . .

“Unless the office digs up some forgotten law there appears to be no reason why babies under fifty pounds and not over eighty-four inches in combined length and girth, cannot be plastered with postage and put in a mail box.”

It was a loophole big enough to ship a child through—and some did.